We hope you had a wonderful summer! Fall is almost here and the Charter Challenge case work will be ramping up again soon. We're pleased to share an interim update at this time and provide more details on Fair Voting BC's evidence.

Charter Challenge lawyer, Nicolas Rouleau, has been in touch with the government. We are expecting them to file their response evidence by the end of the month. Once confirmed, we will send an update to all supporters on next steps.

At this time, we do expect the current case timeline to shift with a case hearing date in 2023. As soon as details are confirmed, we'll be in touch.

Fair Voting BC Evidence - Some Voters Are More Equal Than Others

The last two messages showed how fewer than half the voters are represented by an MP they’ve voted for and how it can take barely a quarter of the votes for a political party to win majority power.

Only a Third of Seats “In Play” in Typical Election 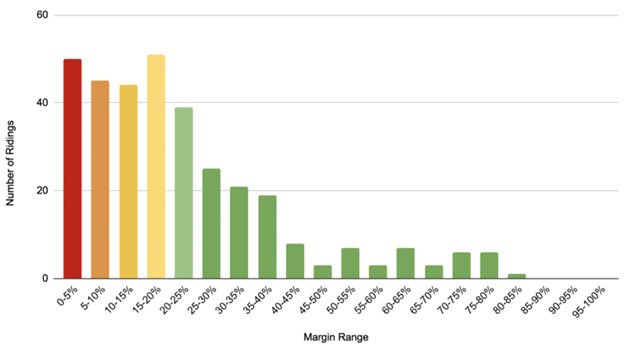 This is important, because “the distribution of safe and swing seats varies across the country, affecting voters in different ways in different places,” which means that the various regions of the country don’t all matter to the same extent in an election.  In general, the outcome in races in BC are most uncertain, while those in the Prairies are essentially pre-ordained, and because the outcome in each riding is “all or nothing”, this means that the overall election results are highly sensitive to small changes in local conditions.  In effect, some voters are more “equal” (or influential) than others, which violates the democratic principle that voters should matter equally, no matter where in the country they live.

This dynamic is the root of the well-known disproportional and occasionally highly counterintuitive election results produced by the FPTP voting system (e.g., in the 2019 election where Conservative Party candidates received 1.2% more of the vote than Liberal Party candidates, but were elected in 36 fewer ridings).

Coming up in our next message - an overview of our “Parity in Legislative Power” project in which we “analyze, quantify, and visualize existing distortions created by the Canadian electoral system in relation to the principle of “one person, one vote”, i.e., distortions in the “relative parity of voting power” of Canadian citizens.”