In our last post, we introduced you to the first pieces of evidence laid out in the affidavit written by Antony Hodgson (president of Fair Voting BC), in collaboration with Byron Weber Becker (University of Waterloo) and Fred Cutler (University of British Columbia), about the results of the 2019 federal election and described our key evidence that fewer than half the voters ended up voting for an elected MP (crucial for our argument that half the voters are not effectively represented).

Government MPs Typically Represent Only a Quarter of Voters

This evidence will let us argue that our current voting system does not respect one of the core tenets of democracy - namely, that legislative decisions should be made by representatives elected by a majority of voters.

Thanks to Byron Weber Becker, we were able to process historical election data in Canada going back to our first election as a country in 1867.  The figure below shows that it’s been a consistent feature of Canadian elections for our entire history that MPs from the winning party are elected by only about a quarter of the voters. 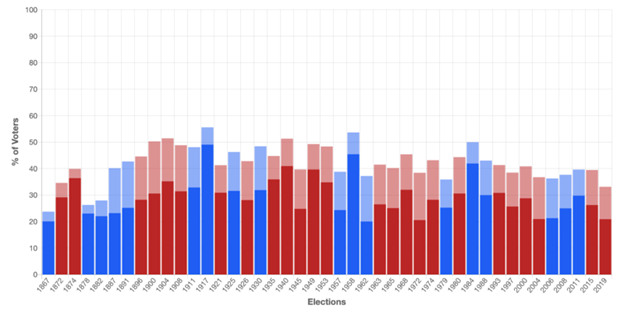 Percentage of effective votes (solid shades) and ‘wasted’ votes (lighter shades) cast for the party that won the greatest number of seats in each Canadian federal election.

Canada Has Moved Away From Principle of Majority Rule:

We concluded that, “overall, the typical result of Canadian federal elections under FPTP in recent decades is that candidates from the party that wins the most seats [only] win up to about 40% of the popular vote. Yet despite there having been only a single true majority government in the past 59 years (after the 1958 election) and despite having its MPs elected based on votes cast by little more than a quarter of the voters (typically cast in a limited portion of the country), the party winning the most seats nonetheless secures majority power in Parliament close to 70% of the time (~41 of the 59 years). This suggests that Canada has over the past few decades moved decisively away from the principle of “majority rule”.”