It's been two-and-a-half months since the House of Commons last met. Electoral reform is officially no-longer part of the Trudeau government's agenda, but there have been some quiet developments on the electoral reform file nonetheless.

Shortly after parliament ended its Spring sitting the Prime Minister spoke openly about his motivations for backing down from his promise to introduce electoral reform for Canada. At a press conference held immediately after the House had risen, Huffington Post reporter Althia Raj asked Trudeau how he was feeling about his decision on the electoral reform file:

I'd like to know if you feel badly about breaking your electoral reform pledge.

I have been consistent and crystal clear from the beginning of my political career. You can look at the speeches I made here in Ottawa at the convention in 2012, or the debates I had on stage, particularly in Halifax during the Liberal leadership, where I think proportional representation would be bad for our country.

There were ways to improve our electoral system in this country and that’s why I made the promise to change our electoral system. I was hopeful that in discussion with all people, all parties in the house, we were going to be able to move forward on a way to do that – to improve our democracy – that would improve the outcomes of future elections for everyone, mostly for Canadians.

Unfortunately it became very clear that we had a preference to give people a ranked ballot so that they could reduce the aspect of strategic voting so that they could put their second choice, third choice down on the ballot and therefore have every MP be at least 50% of their riding. We thought that was the right way forward.

Nobody else agreed. The NDP was anchored in their belief that proportional representation was the only way forward. And I have been consistent and crystal clear from the beginning of my political career – you can look at the speeches I made here in Ottawa at the convention in 2012 or the debates I had on stage, particularly in Halifax during the liberal leadership – where I think proportional representation would be bad for our country. I think it would weaken one of the great things about Canada, which is that we can come together in our diversity to work together on big things. And I think that creating fragmentation amongst political parties as opposed to having larger political parties that include Canada’s diversity within them would weaken them. The Conservatives wanted the status quo no matter what. And the only way to break that logjam was to do a referendum, which I definitely don’t think was in the best interest of Canadians.

So it was a very difficult decision for me to make the determination that even given my own hopes that we would be able to move forward on reforming the electoral system, that there was no path to do that. There was no openness to compromise in the other parties, and I wasn’t going to use my majority to bring in a system just to tick off a box on an election platform. The interest of Canada, the interest of Canadians, the focus we have on what matters deeply to all Canadians – to grow the economy, to create opportunities for the middle class – was at the centre of what we are doing and what we’re focused on, and the lack of a path forward for this country made it a difficult but necessary choice I made.

Many electoral reform advocates were initially skeptical of Trudeau's promise to engagement in meaningful consultation on electoral reform because of his preference for the ranked ballot. These comments now appear to validate those suspicians. For more fact-checking and to hear what opposition MPs had to say about Trudeau's remarks, see Raj's article Trudeau Blames Opposition For Not Reading His Mind On Electoral Reform.

MyDemocracy.ca was the online platform introduced by then-Minister of Democratic Institutions, Maryam Monsef, to survey Canadians on their democratic values. The platform was criticized by many for asking too many personal and false-choice questions, without directly addressing the issue of electoral system reform.

In a story from Marie-Danielle Smith in the National Post, it appears more questions are now being asked regarding the government's motivations for asking certain the types of questions that caught the attention of privacy advocates inside and outside of government.

Even as the federal privacy commissioner decided to launch an official investigation, government officials were quick to reassure Canadians that the protection of their personal information was of utmost concern. But according to documents obtained by the National Post, the Liberals only established specific privacy protections for the data collected through MyDemocracy.ca well after the website went online.

While the site’s creator had its own privacy policy in place, the Privy Council Office’s original contract with Vox Pop Labs contained no explicit provisions about keeping respondents’ personal information out of government hands. That first contract, obtained by the Post via an access-to-information request, in fact stipulated that personal information collected through the survey be saved and given to the government.

As well as collecting people’s views on electoral reform, MyDemocracy.ca asked users for their gender, age, occupation, education, income, first language and minority identity. Respondents were also asked for postal codes and, if they wanted to be sent a record of their results, email addresses.

Smith's story in the National Post notes that the issue remains a subject of an active investigation by the federal privacy commissioner. The results of that investigtation will be made public by the end of September. The House of Commons returns from its summer break on September 18th.

[Bias warning: We're involved in this one.] 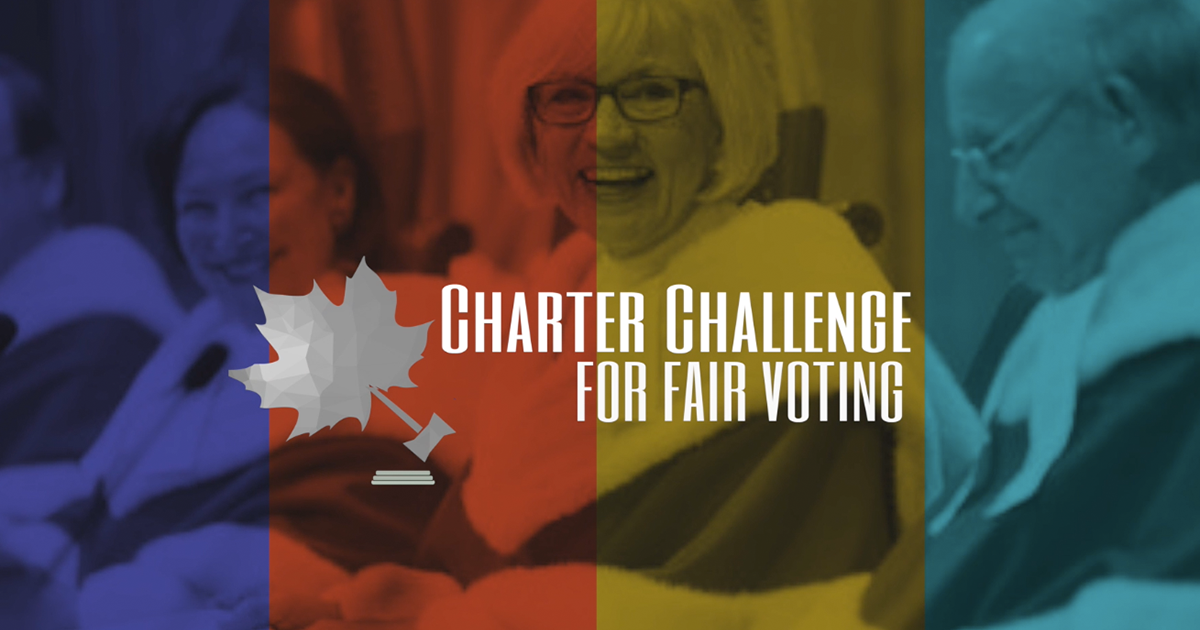 Shortly after the federal government announced it was backing away from its promise to get rid of first-past-the-post, Fair Voting BC began collecting pledges to support a Charter Challenge to fight for a better system in court. The result of such a move would ultimately have the Supreme Court recognize the current system violates the principles set forth in the Canadian Charter of Rights and Freedom and order the government to develop a system that does not contravene the Charter (most likely a proportional system).

In June of 2017, SPRINGTIDE joined Fair Voting BC to collaborate on ensuring the case makes it to court. At the beginning of August over $44,000 had been raised by 454 Canadians to fund the costs associated with ensuring the case is filed. Donations are still being collected.

The case will be based on several arguments, namely those resting on sections 3 and 15 of the Charter which guarantee Canadian's the right to vote in elections, and equality 'before and under the law' respectively. Each Canadian's right to vote has been interpreted by the court to mean something more than simply casting a ballot. Several Court rulings have affirmed that the right to vote must also have some meaningful effect on the outcomes. This was perhaps best expressed by the now-Chief Justice of the Supreme Court

Each citizen is entitled to be represented in government. Representation comprehends the idea of having a voice in the deliberations of government.

This statement is referenced in the court's decision in the Figueroa v. Canada case. The Figueroa case was rooted in the question of whether or not a federal party that fielded fewer than 50 candidates should be recognized with official party status. The Supreme Court of Canada, in a landmark decision at the time, decided that such a party should have official status. In their decision, the Supreme Court justices made the following assertion about the right to vote:

While on its face, s. 3  grants only a right to vote and to run for office in elections, Charter  analysis requires looking beyond the words of the section and adopting a broad and purposive approach.  The purpose of s. 3  is effective representation.  Section 3  should be understood with reference to the right of each citizen to play a meaningful role in the electoral process, rather than the election of a particular form of government.

The case of Figueroa v. Canada is just one of the cases that lays the groundwork for a more explicit ruling on whether the first-past-the-post voting system violates sections of the charter relating to equality and the right to vote.

The next step for this case will be to determine which province the case will be filed in and which organizations will serve as it's applicants.